Enter a prison and brace yourself for the harsh experience of inmates imprisoned in colonial times.

Not much has changed since the 1900s in terms of facilities and, many say, in treatment.

Still, some inmates have left prison reformed and better skilled to earn a living on the outside. One man writes uplifting children’s books and is looking for a publisher.

If you are remanded, it’s likely you will be detained in a facility that has been in existence for more than a century.

The Nairobi  Nairobi Remand and Allocation Prison was completed in 1911.

If you’re remanded at Shimo La Tewa Men’s Prison in Mombasa county, you will be cooling your heels in premises built in 1953 during a state of emergency.

And if you are remanded at the Isiolo Prison, you will be in an enclosure built in 1947.

Kakamega Main prison was built in 1932 by the colonial government and it houses more than 1,205 inmates. The recommended limit is 500.

In the time between your arrest and your release from prison after serving your sentence, you probably will have contracted tuberculosis. pneumonia, scabies or diarrhoea — or all of them.

They have been found to be the most prevalent ailments in Kenyan prisons, according to a survey on the criminal justice system that Chief Justice David Maraga released in 2017.

Kenya has about 57,000 inmates, many remanded and convicted for petty offences. First-time offenders are sometimes in the same population with hardened criminals.

Day after day, year after year, imagine having no space to call your own, no choice of whom to be with, what to eat, where to go or what to do.

There threats and suspicion everywhere. A gentle human touch is rare. You’re separated from family and friends.

But prison life is not that bad for the rich and influential.

KTN investigations established that convicted criminals and suspects in remand, who have cash, can live like kings (of sorts) in self-contained cells with satellite TV and flush toilets.

Meantime, thousands of poor convicts wallow in misery and want.

Former  Kamiti jailbird Stephen Musyoka (not his real name), says the initial search is not as thorough as you may imagine.

“You walk in the door and you get strip-searched,” he says. That’s for those suspected to be in possession of drugs.

“You then hand over all your possessions. Identification details are recorded in a register duty officers. You are issued with two blankets and a prison uniform or Kunguru, a striped black and khaki outfit,” Stephen says.

Prisoners then are assigned where to sleep, it may be a room with dozens of mattresses.

His first day in prison was a nightmare. Prisoners ‘bid’ for new inmates with the highest bidder turning the ‘newbie’ into a wife.

“There is a prisoner in charge of allocating sleeping quarters to new inmates. So, when you come in as first-timer and are still in the holding area, the prisoners in charge — we call them ‘Overall’— will be bribed with amounts ranging from Sh300 to Sh500,” Stephen recalls.

The highest bidder will have the new prisoner assigned to his cell.

“Their preference is usually young, ‘yellow-yellow,’ plump men who are in prison for the first time,” Stephen says.

When you get to the cell, which is usually full, your ‘husband’ will let you share his mattress, food and cigarettes. But come night, you will have to pay back.”

Omar Ismael, 64, a former Manyani inmate who served nine years in his exoneration in 2017, says he woke up at 5a, despite his advanced aged.

They then squat in groups of five to be counted and checked by guards.

“My knees are still hurting to date. I have a joint problem too as a result,” he says.

After the headcounts, they line up their thin mattresses against two walls, leaving a small pathway at the centre for easier movement.

“Those who wish to take a shower can. Toiletries and buckets are few and they are usually shared.”

He recalls that in prison there are very aggressive and bitter inmates who never want to share anything.

“Aggressive inmates start fights each time you touch an item that belongs to them. So you just avoid them.”

Ismael says one bathroom and one toilet is shared with close to 100 inmates.

“It was very disheartening to strip naked, take a shower with men the age of my grandchildren. Worse is the congestion, so the press of naked bodies in the bathrooms was very disturbing.”

Ishmael said homosexuality is not practised in the open because it is severely punished.

Punishment includes being secluded in a separate room without bedding or blankets.

“The lawbreakers are secluded and sleep on the cold floor. They are also served half meals while in solitary confinement.”

Ismael says in extreme cases, such as assault,  you are only served ugali and salty water for lunch and supper while in solitary confinement.

If the offence is minor, warders beat you thoroughly with a mace or a whip.

Breakfast is prepared by selected convicts.

Ismael says being a cook is a coveted job as cooks sleep in separate rooms and are spared manual labour.

The coveted role comes with a lot of requirements.

“You must possess an American height ideal for twisting those long mwiko za ugali'(cooking sticks) inside huge pots. Muscles are a must as you will be cooking ugali for more than 300 people two times a day,” Ismael says.

To be a cook, one must have served a good part of their sentence, undergo physical fitness, medical examinations and a mental checkup.

After that, the cook sits for an examination regularly.

“Being of good morals and behaviour is also another qualification as you might, in a moment of inspired lunacy, poison all askari jela (wardens) and bully inmates,” he says. 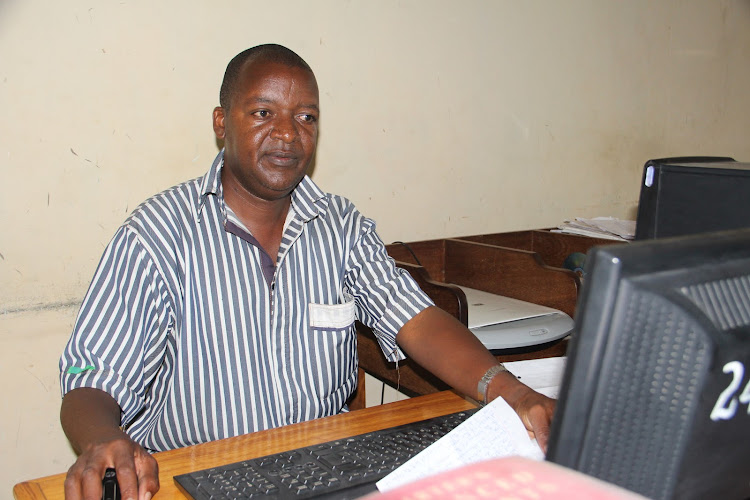 Prison life seems like a nightmare to most people, however, some inmates have discovered their talents through rehabilitation programmes.

Tony Njogu, a former computer teacher, is serving 15 years for defilement. He was convicted in 2015 in Nairobi and said he was wrongly convicted.

He always dreamed that one day he would write a book. It was in his cell at Kitengela Prison that 50-year-old  Njogu achieved his dream.

To date he has written 12 books.

His first book, Tales of Solitude, explores the strength he gained after being sentenced. He wrote it while at Kamiti Maximum Security Prison.

“Whereas I thought it was the end of the road for me, it also became an exciting journey,” Njogu says.

He writes late at night. As his fellow prisoners’ sleep, the quiet of the night offers him the chance to write.

When sentenced, he says, the first thing that occurs to a condemned man is that he will never see his family again. As time goes by, one starts to discover his inner self; one could even enjoy solitude.

“Having grown up hearing of names like Manyani, Kamiti and King’ongo, I equated prisons to the scriptural Sodom and Gomorrah,” Njogu says.

“However, it was in prison that I was able to give myself a second chance,” he says.

His major challenge is research, as in prison he has no access to the internet.

“I’m hoping I get someone to publish my books which are on soft copy. My target audience is children and I have written moral stories to shape them up,” Njogu says.

He says he wants children to grow up morally straight so that they don’t end up in prison.

Kenya has a prison population of more than 57,000.

500,000 people move through the criminal justice yearly, placing a burden on justice system.

♦ Violates domestic and international law standards pertaining to conditions of detention. The separation of different categories of prisoners cannot always be achieved

♦ The combination of overcrowding, ageing buildings and lack of resources drive many of the problems

♦ Inadequate cells and furnishings, a monotonous diet, sickness and disease, a shortage of ablution facilities and prisoner idleness

After lunch, they return to their workshops for two more hours.

The children’s book author,  Tony Njogu, is also a computer teacher in prison.

“A certificate is awarded upon successful completion,” he says.

The rehabilitation programs run from  Monday to Friday.

There are three meals a day; supper is served at 4pm.

Ugali and beans are the staples and may be accompanied by vegetables.

According to a report shared by the national audit, nearly 80 per cent of prisoner interviewed said the food in general was very bad or bad.

After workshops, prisoners are allowed to spend their free time in a common room watching television, playing games in the field, socialise with fellow inmates.

For some, this is the time they are visited by their loved ones.

Visits are permitted daily between 8a and 6pm. A prisoner is limited to two visits a month.

Former inmate Ismael  says, “One speaks to visiting family and friends through a mirror and you have to shout for the other party to hear you.”

According to an audit conducted by the Legal Resource Foundation trust, only six of the 14 stations reported a visitors’ area where detainees can receive visitors.

At 8 pm, cell doors are shot. Prisoners squat in their dormitories for a head count.

By 9pm they should be asleep.

Due to a shortage of bedding, convicts sleep on tattered mattresses with worn-out blankets

Mattresses are shared by two or three people

“Lack of space while sleeping  is so bad that people have to take turns,” to lie down, or turn,” said exoneree Omar,

Why are the mattresses torn and old?

“Inmates lack of basics like tissue paper leads them to tear pieces of mattresses and use in the cloakroom,” he says.

That is the day to day life behind bars from Monday to Friday in some tough prisons.

On weekends, the program is different as there are no workshops. After breakfast prisoners can engage in recreational activities available at the prisons.